Following up the Drupal Commerce 2.0 launch announcement, the official 2.0 release launched this morning! A few of Acro Media's Commerce teammates decided to celebrate (the other 60-or-so team members were still required to stay at their desks and write code). We thought we'd share with you in case you couldn't make it in person. Tag #acromedia in your #drupalcommerce2 launch party pics! 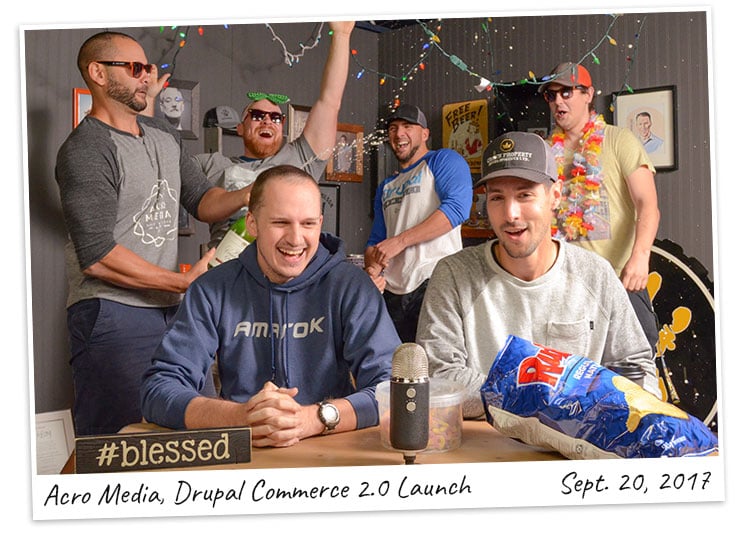 But, enough about that! What you really want is to try it, don’t you? You’re in luck! There are a couple ways to take it for a spin.

We’ve setup a demo site for Drupal Commerce 2.0 allowing users and fans see what it can do out of the box. Yes we've done a little additional theming, but no custom functionality! The demo is packed full of awesome stuff, and even has some guided tours that walk you through features. Check it out at your own speed:

Would you rather walk through the demo and be able to ask questions and get immediate feedback? Maybe talk about what it takes to get an existing eCommerce website into the new Drupal Commerce? Get into the weeds on migration? We have you covered. Contact us to speak with one of our Drupal Commerce business development experts. We’ll arrange a personalized demo and discussion around your schedule.

The Commerce Guys will be at DrupalCon Vienna to show off the official release. So, if you’re in the area, or planning to attend, go see them! It’s taking place September 26-29, 2017 at the Messe Wien Exhibition & Congress Centre.

A lucky few from our Acro team will be there too. Our CTO, Shawn McCabe (smccabe) will be in attendence and if you’d like to schedule in a meeting with him contact us. We also have Vicki Spagnolo (quietone) and Rakesh James (rakesh.gectcr) there giving talks. Vicki and Rakesh will both be presenting on the topic of “Migrate Everything into Drupal 8,” which is now very relevant since both Drupal 8 and Commerce 2 will be officially released. Rakesh will also be giving a solo session on “Prophecise your phpunit tests”. Again, if you’re there, check it out!

Drupal 8 was officially released on November 19, 2015.  Because of this, Drupal 6 has now reached end-of-life, meaning it’s no longer officially ...
END_OF_DOCUMENT_TOKEN_TO_BE_REPLACED

Celebrate the Launch of Drupal Commerce 2.0!