Posted in Digital Marketing
read
Back to blog Subscribe

Four years may not seem like a very long time, but in the social media realm it is an eternity. When the 2010 World Cup kicked off, Facebook was still two years away from going public, Pinterest was just two months old and Instagram did not even exist. The 2014 World Cup has shown that social media continues to advance and change how we communicate with each other around the globe. This is seen in the astronomical number of interactions that were recorded during the 2014 World Cup.

Social media is no longer a secondary resource for companies. We have reached a time where it is no longer sufficient to have a company Facebook page that is simmering on the backburner and call that your social media strategy. “Facebook says 10 million people had 20 million interactions during the U.S.- Portugal match” and that was just the beginning of the World Cup competition!

During Germanys annihilation of Brazil, Twitter confirmed that the match was the most tweeted sporting event contest ever with 35.6 million tweets. The final match between Germany and Argentina came in a close second with 32.1 million tweets. To put this into perspective: the most tweets that have ever gone out in a minute during a Superbowl was 382,000 — during the German onslaught in the semi-final, when Sami Khedira scored the 5th goal, an average of 580,166 tweets were going out per minute, and when Mario Goetze scored the extra time winner in the final, twitter recorded 618,725 tweets per minute! 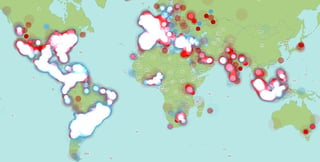 The world cup is exactly that — the world coming together to contend for one cup. We have reached a day and age where communicating with nations around the globe is now as easy as signing into a Facebook, Twitter, Skype, or any other social account. Information is endless, making surprises few and far between.The World Cup  travelers most likely knew exactly how the stadium and city of Rio de Janeiro was set up before they even arrived in the city. In the months leading up to the World Cup, Google reported that the number of World Cup searches was larger than the number of searches during the Tour de France, Super Bowl, and 2012 Olympics, combined!

Overall, the 2014 World Cup has proven two things: social media truly is a way to communicate with the masses around the world, and that the entire world coming together for one common interest proves that we really aren't all that different.

We understand that the biggest social media event in the World may not be attainable, but the power of social media should not be underestimated, on any scale. Acro Media would love to set you up with an all-star, engaging social media campaign that won’t be left simmering on the back burner. We get results and have number to prove it! Hit us up for a free consultation!

5 Reasons Why Your Business Should Be Using Social Media

“You can buy attention (advertising). You can beg for attention from the media (PR). You can bug people one at a time to get attention (sales). Or ...
END_OF_DOCUMENT_TOKEN_TO_BE_REPLACED

Is Your Website Haunted by these Out of Date design Trends?

If this morning you put on bell bottom pants and a ruffled shirt I hope its part of your Halloween costume. Much like fashion trends web design has ...
END_OF_DOCUMENT_TOKEN_TO_BE_REPLACED

5 Split Tests That Every Ecommerce Website Needs to Try…

The traffic going to your website is great, your getting tons of people looking at your products and offers…
END_OF_DOCUMENT_TOKEN_TO_BE_REPLACED