There is now an easier way to install Drupal Commerce! And the best part is that you don't have to do any type of crazy spinup. It does involve a little bit of pseudo-programming, but if you know your way around a command line, you should be OK.

A Bit of Background

There's a Commerce Kickstart that exists for Drupal 7. It's Drupal Commerce and all the standard add-ons put together into a mock store. It shows you the power of Commerce and provides a bunch of examples. That can be helpful because Drupal is so modular and can be a bit daunting at first. You install just Commerce, but then if you want, say, gift cards, that's a separate module you need to add. There are all these little bits and pieces you have to get, and not all of them have intuitive names, and it can be very confusing. Commerce Kickstart was meant to solve that problem. Which it did, to some extent.

But the Drupal 7 Commerce Kickstart tried to be both a demo and a base for you to build from. It was primarily a demo, but lots of people used it as a base. The problem was that the demo was already so customized that many people ran into issues because they needed to delete or remove different things instead of starting from a clean setup.

A Better Way for Drupal 8

For Drupal 8, we decided to build two separate things: a demo, and a kickstart that would truly assist developers in getting started. It covers Drupal Commerce and all the normal add-ons you would typically add. With the original Commerce Kickstart, you got all the add-ons as a complete package, and you would have to remove whatever you didn't want. For Drupal 8, Commerce Kickstart is an actual builder.

And it's easy to use. You select a region, for instance. If you say that you're based in North America and only ship there, you're not going to see the options for integrating with the Royal Mail, because that's irrelevant to you. Then you go through the different sections. What do you need for payments? For shipping? You select all the options you want, and Commerce Kickstart uses Composer to build an install file for you. 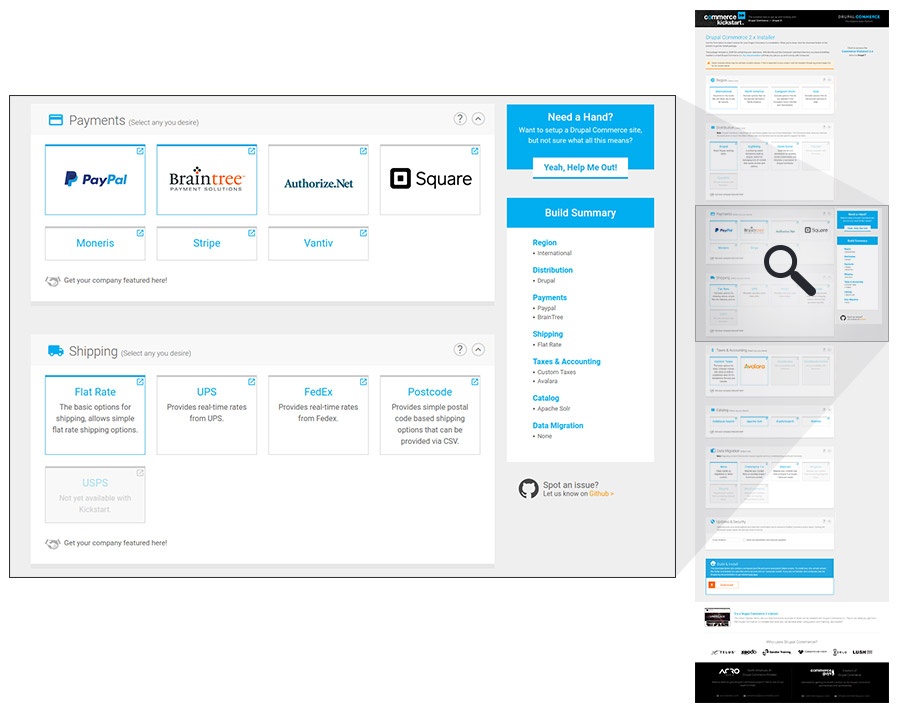 Why Is This Cool?

For one thing, it saves you time. For another, it's a great introduction for people who aren't familiar with the Commerce ecosystem. That latter point is key, as that was the biggest hurdle Commerce Kickstart was trying to overcome. If you're new to Commerce and you don't know about all the add-on options, you might install Drupal Commerce and just get stuck. This gets you much farther in the process.

You will eventually be able to choose whether you want a clean install, or whether you want to use demo content. With example content, you could see what a nicely configured product looked like, for instance. Or see a sample tax item, or a sample shipping method. This could be great for people who aren't super technical or who just aren't familiar with Drupal Commerce conventions.

This functionality isn't out there yet, but it is coming down the pipe soon. You can see the status of the Demo Content module here.

We also have pre-set-up migrations. So it's becoming easy to migrate from an Ubercart site or a Commerce site on Drupal 7. Options for Magento and Shopify are also coming.

If you'd like a personalized tour to discuss how Drupal Commerce fits into your ecommerce solution, give us a shout. We're happy to show and tell.

Why The Rebrand: Message from the CEO, Shae Inglis