Why The Rebrand: Message from the CEO, Shae Inglis

Backstory for the original

Hard to believe, but Acro Media turns 20 years old this year. We started out as a bunch of naive 20-year-olds who believed we had everything to be successful: 5 working computers, 400 square feet in an old abandoned skateboard shop, and 3 months’ worth of wages in the bank.

We had no business knowledge, sales skills, or direction of any kind, but we knew that the Internet was a vast new world of opportunity and we wanted to somehow be a part of it.

Most of the partners had fine arts and computer graphics backgrounds, so we set out to design websites. Our early success was solely due to the the crazy amount of money being invested in every Internet business under the sun. All you needed was a business card that said web design and money would be thrown at you.

Firewood was the spark for our name

My mom came up with the company name during a trip I took with my parents to get firewood. We believed that the name had to start with an A because pretty much every directory was in alphabetical order and we wanted to be near the top. We had a thesaurus (the book kind) and a pad of paper and started writing words that started with A and could potentially sound high tech. I fell asleep on the way home while my mom continued the search.

When I woke, she was excited to tell me that she had found the word "acro."

It was a combining word, so it made sense to attach it to "media." Thus, Acro Media started as full-service web design and marketing company. Voila!

We ran the business for some time with just the Acro Media name and no logo. Decisions were made as an executive council of sorts, with no one individual leading definitively, so many company initiatives became long and drawn out. The logo was definitely in that category.

We eventually settled on our painty hand splat. It represented creativity and uniqueness; like a fingerprint, our designs were one of a kind. We included a spin on the @ swirl to represent the Internet. And the number of digits on a hand represented the number of working partners we had at the time.

But on to the new rebrand. We decided to start from scratch instead of simply lopping off digits to accurately reflect the reduced number of partners.

Acro just rolls off the tongue

Everyone refers to the company as Acro, and we’re constantly correcting this lazy reference to the registered name Acro Media. It’s true that "media" does not accurately reflect what we do and something like Acro Commerce is much more fitting, but it’s not something we were willing to change. Besides, it took us 18 years to get acromedia.com and we didn’t have it in us to attempt acro.com.

We decided to instead put prominence on just the word "acro" and downplay "media" to the point where it could feasibly be removed without impacting the integrity of the mark. This also gives us the option to add a subsidiary of Acro Media in the future, by replacing the word "media" with something like "holdings" or "bats" for the company baseball team.

We played with the idea of producing another standalone symbol to represent our company. We did our own in-house designs and leveraged crowdsourcing to expand our search for new ideas. We had more than 200 concepts to work with and whittled it down to three options. Two of the final three choices actually included a new symbol to replace our hand, but ultimately we were drawn to a standalone word mark, similar to the final you see here.

There’s strength in simplicity. And this particular mark hit many of our criteria: 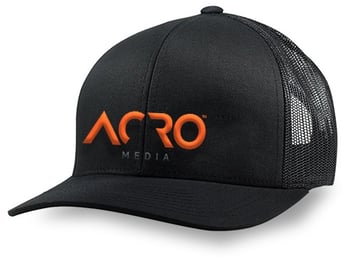 Every good logo should have a story, and this one is no different.

First, this word mark more accurately reflects the meaning of "acro," a challenge we had on our first go back in 1998. We tried many literal representations of the definition of the word, including logos with top hats, acrobats, and spinning tops. This representation is more abstract, with the letter A modified to mimic a pinnacle, tip, or leading edge of a knife. We dropped the brace in the middle to exaggerate this.

You’ll also notice that the C and R have been modified and the negative space left is a triangle shape. The stance of the A, based on a heavily modified ARS Maquette Pro font, was widened to mimic the triangular space left here and, if it were moved, it would fill the gap perfectly. This represents our mission:

To bridge the gap between open source and enterprise commerce

Acro Media believes open source is a viable alternative, and in many cases a more appropriate solution, for enterprise commerce. We educate, promote, and service the market with Drupal Commerce, the commerce module built in Drupal, the open-source world-class content management platform. Check out our About Us page if you would like to see the entire picture of how we are bridging this gap.

Some say the triangle is the strongest shape in the known universe. We use this triangular A as a secondary supporting element, such as a bullet point and as our favicon. We also use it subtly in backgrounds to further support the notion of our leadership and guidance in reshaping the commerce industry’s view of open source.

We didn’t stray too far on this front, but there is a subtle difference between the old #FF9900 we’ve all come to know and love. Web standards have changed, and accessibility requirements along with them. We shifted colors to #F95E27; not as easy to remember, but a darker version of orange that meets these standards and gets us one step closer to being fully compliant.

We decided to go with a one-color reverse in white for inverting the logo on dark or colored backgrounds, as you can see here.

A rollout to be proud of

After 20 years in business, you can only imagine how much collateral was splattered with the branded paint.

We compiled a shared doc that included the following:

Next, we put together a brand guideline to define correct usage, which each team member used for execution. Check out our complete usage guide.

The entire rebranding exercise took only about three months from start to finish, even with a Christmas break in there. And other than a couple of 3rd parties out of our control, almost everything rolled out in a 24-hour period, including the arrival of new company T-shirts. A huge undertaking, but executed beautifully. It was a proud moment at Acro Media and the company now has a brand that represents what it stands for.

Of course, on day one with the new logo, the internal team had some fun pressing our creative director’s buttons and purposefully posting their own renditions of the logo, which went over like a lead balloon. Check out one of my favorites.

Catch up with Acro Media at DrupalCon 2018, in Nashville, TN

Discover Drupal Commerce Acro Media is proud to announce our continued support of the Drupal community and participation at Drupalcon 2018 in ...
END_OF_DOCUMENT_TOKEN_TO_BE_REPLACED

We're at DrupalCon 2018 in Nashville. Come see us!

We're all set up at DrupalCon 2018 in Nashville, ready to talk about Drupal Commerce and show you how it works. Come swing by our booth (#803) and ...
END_OF_DOCUMENT_TOKEN_TO_BE_REPLACED

DrupalCon 2018, in Nashville, TN, concluded last week and it was a blast! While it's still fresh in my mind, I thought I'd take to opportunity to ...
END_OF_DOCUMENT_TOKEN_TO_BE_REPLACED